skip to main | skip to sidebar

THE CANADIANS, THE BEATLES AND THE JUNGLE BOYS 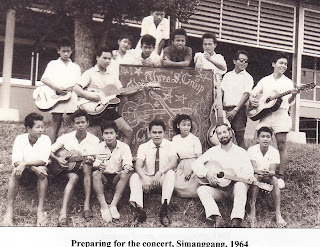 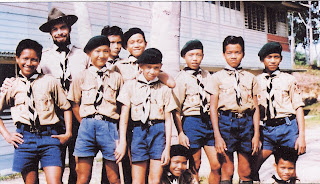 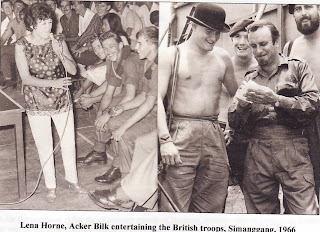 They came back to see the difference they had made.  They came with cameras in the early 1960s that were still rare in the interior Borneo.  These barely 20 years old teachers made the difference and so were those jungle kids in the years to follow.  That rare cameras of the old days preserved photographs of people and places that are rare and valuable now.  Thanks to the big guy, Llyod Jones.  Tell me if you know those in the photographs.
Posted by Sanib at 9:18 PM 4 comments:

THEY CAME BACK: THE CANADIAN 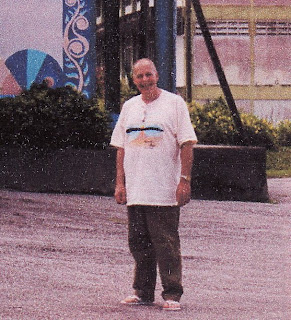 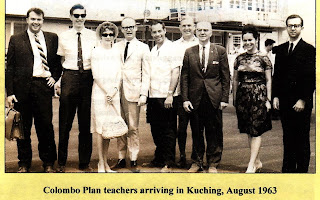 If you work in a museum, you never know who will come and bring something old, including memories.  In the last few days of 2008 a big and tall man simply walked into my office and introduced himself as Lloyd Jones who hails from Thunder Bay, Ontario, Canada.  I stood there shaking his hands as if struck by lightning and went blank.
This guy brought his memories to my museum.  He and a group of Canadian volunteers came to teach in several newly built secondary schools all over Sarawak at the height of the undeclared war with neighboring Indonesia in 1963.  He taught until 1965 and came back to teach for a short period in Binatang, now Bintangor.
After an hour or so listening to Mr. Jones and looking at copies of old photographs, I sensed that he felt in love with Sarawak and its people.  Like my own Peace Corps teacher, this guy was once a fine teacher who loved the kids and really wanted the kids to succeed in their studies and lives.  Mr. Jones was so proud to tell me that some of his students went to universities around the world and some became lawyers, engineers and priest too.
Posted by Sanib at 10:58 PM 5 comments: 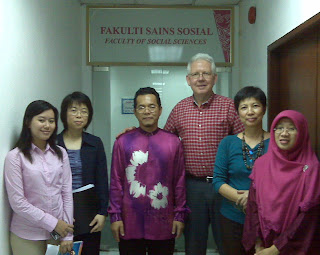 He came back again.  Prof. Dr. Richard Schtaz, from Whitworth University, Washington State, USA came back to Sarawak.  This time for about two weeks.  He was a Peace Corp volunteer who taught the first batch of Lawas Secondary School, at the Sabah end of Sarawak from 1966 to 1968.  He came back to present his study of rural development and economics base on the case study of his former students at the Faculty of Social Sciences, University of Malaysia Sarawak on the 15th January.  From his study he lauded the Malaysian Goverment for spending huge sum of money to build secondary schools in all the provinces in the early years of independence.
The picture above Prof. Dr. Schtaz, obviously in the centre, are seen with one of his male students of the old school and on the right are the two deans of the faculty.
Posted by Sanib at 1:32 PM 2 comments:

Kalimantan Barat Expedition: In Search of Lost Kingdoms of Vampires #6 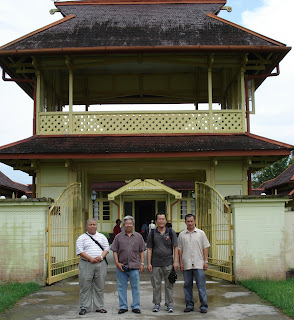 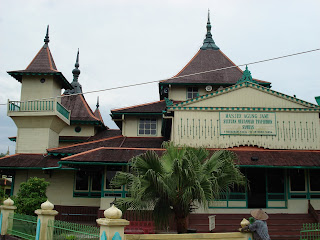 The Sultanate of Sambas

The keraton of Sambas, royal family, continues to preserve its palace and other royal regalia.  Sultan Tengah, the first and last sultan of Sarawak, founded the Sambas Sultanate.  He was the younger brother of Sultan Jalilul Jabar of Brunei who challenged the throne.  To solve his predicament, Sultan Abdul Jalil finally relented and anointed Tengah to be the Sultan of Sarawak, a rich province in the opposite end of Brunei city.  Tengah brought with him a thousand followers and upon arriving in Sarawak, now Kuching, built a palace at Sungai Bedil, the present site of the Astana. 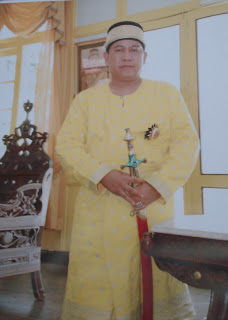 Being young and still a bachelor, the adventurous Tengah, sailed off to Johor to see his auntie.  During a dance party a misunderstanding occurred and Tengah with his followers sailed home.  However the prince encountered devastating storm and found himself in the Sukadana Sultanate, now Ketapang in West Kalimantan, Indonesia.  They rescued by the sultan and took him to stay at his palace.  Tengah made a big impression on the sultan so as to give one of his princesses’ hands for marriage.

After several years in Sukadana, Tengah was assigned to Sambas to be its founding sultan.  The royal couple built their palace at the confluence of Sungai Sambas and Sungai…..  When their prince, Pengiran Sulaiman reached the mature age of 25 years old, Sultan Tengah felt it was time to go home to Sarawak and sailed with some followers soon after.  When they were about to enter the Sarawak River at Santubong, Sultan Tengah wanted to ease himself at Batu Buaya but was attacked and struck by one of his followers at the opportune moment when the sultan had taken off his talismans that gave his invincibility.  Subsequently the people of Sarawak, led by Datu Patinggi and Datu Bandar, managed to get the royal body and gave him a proper burial at the foot of the legendary Mount Santubong which was a thriving port-city from the 7th to the 10th centuries.

Kalimantan Barat Expedition: In Search of Lost Kingdoms of Vampires #5 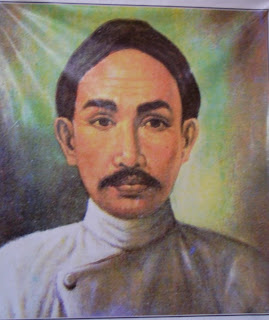 Who is this man?  Any resemblance of Mr. Dracula in Pontianak, the City of Vampires?  I think there is. This painting is found inside the centre of the earth, the Equator Monument.
Posted by Sanib at 2:59 PM No comments:

Kalimantan Barat Expedition: In Search of Lost Kingdoms of Draculas #4 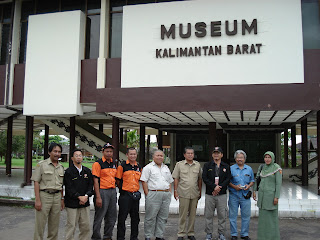 In Search of Dracula of Bornneo

Drs. Lisyawati hosted us a dinner of Tom Yam river prawn.  What a surprise in the City of Dracula, you could find Thai food.  It only proves that this Thai food is a global dish; several years ago I found many Thai restaurants in Paris and I orderd this “the hotter the better” soup.

After dinner everybody disappeared into their rooms.  The new Orchardz Hotel provided satelite TV programmes, mostly Indonesian and free wifi access to Internet that I did not really expect to find in the jungle of Borneo.  I got carried away surfing the internet and went to bed late.

The alarm in mobile phone failed; most probably I forgot to reset it.  Somehow I woke up this in time for a quick breakfast and discovered the rest of members of the expedition were waiting for me.  We checked out from the hotel and speeded off to Sambas, the furthest kingdom.

I joined Drs. Lisyawati and two of her staff in a 4-wheek Toyota Terrano while my others were in Ford Econovan.  It was going to be a 6-hour drive and we planned to reach the old Kingdom of Sambas in the early afternoon.  Pontianak, the City of Dracula, was already in the early morning traffic chaos of cars and motorcyles,  like the small Honda Cubs.  Not traffic rules here, it was the rule of the horns creating a cacophonous adn rioutous street scenes.

The only road to the kingdom of Sambas was not too bad; narrow and in several stretches there were potholes.  Electricity line runs parrellel to the road.  In fact the road runs along the coastline and tidal peat swamp almost all the way but there are endless row of villages of tiny houses.  The swamp is ubiquitous and I felt it is drowning the life of the people.  So not football fields or playgrounds to be found instead there are wet paddy fields.  I felt sorry for the kids and young people.

After about an hour drive I lost sight of the van behind.  Somehow Abdul Halim’s mobile phones sudenly worked; since our arrival our mobile phones failed to work despite having roaming capabilities.  I told Abdul Halim our plan was meet in Sambas town for lunch and not to be tempted to stop at Mempawah, Singkawang and Pemangkat along the way. 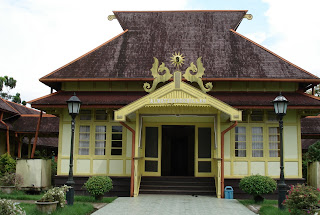 We drove to the palace of the Kingdom of Sambas, a sultanate founded by the Sultan Tengah of Sarawak in the middle of the 17th century.  It thrived to become one of the more important kingdoms in Borneo and to the  Malays of Sarawak it ranked second only to Brunei. Except of some parts, the wooden palace is still in good condition situated at the confluence of Sambas and Spanduk Rivers.  With many legends and the myth of a husband and a wife cannons that bore seven baby cannons it has been a very popular tourist attraction. Unlike in the palace and holy grave in Pontianak, here in Sambas there was no beggars.
Posted by Sanib at 11:14 PM No comments:

Kalimantan Barat Expedition: In Search of Lost Kingdoms of Draculas #3 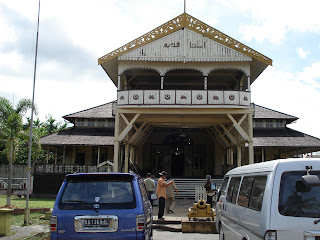 Pontianak:  The City of Dracula
In Pontianak, the capital of Kalimantan Barat/West Borneo, we stayed at the new Orchardz Hotel on the Gajah Mada Road.  On the 25th November we made a courtesy call on the Director of Balai Sejarah dan Kebudayaan, Mrs. Lisyawati, who carries research on history and culture of the province.  The city of dracula today is a big sprawling third world urban landscape consisting of the old town and the new town of 1 million people.
Later in the morning, with an officer from our Indonesian counterpart as our guide, we went to the palace of the former sultan of the Al-Qadri Dynasty across the Kapuas River, the longest river in Borneo.  The dynasty started in early 18th century with Sultan Hamid after he succeeded in defeating draculas in the areas as the name Pontianak attests.  The dynasty ended when the Japanese massacred all West Borneo's royal familes and 21,000 others during the Second World War.
The palace of the sultans was made of hard Borneoan wood called belian is still standing and is a very popular tourist attraction.
Posted by Sanib at 6:38 AM 2 comments:

3rd Largest in the World 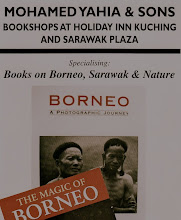 Give them the clicks....

As good as it lasts. Plan your vacations to explore the virgin jungle and wild forests with its rich and mysterious biodiversity and its people with their pure natural culture. Discover the real and thrilling tattoo making you will never forget. Explore your wildest dreams here in wild Borneo

All rights reserved. No part of this blog may be reproduced or transmitted in any form or by any means without permission in writing from the blog creator. Request for permission should be submitted to hang.alBiruni@gmail.com. Thank you